Comments are closed here. Comments about this post should be made here
The flip side of the entrenched incompetence in science today is that all it takes is scientific competence to make revolutionary discoveries, or fundamental corrections to current dogma. Being a competent physicist rather than an incompetent climate scientist (which 97% of them demonstrably are), I was able recently to post an answer on yahoo.com to a question about the greenhouse effect on Venus, an update to which I give here:

Surprisingly to most, there is no greenhouse effect at all, and you can prove it for yourself.

This is much warmer than the temperature at the surface of the Earth (at pressure = 1000 millibars), which is about 15ºC = 288K. HOWEVER

Venus is closer to the Sun, and gets proportionally more power from it. Earth is 93 million miles from the Sun, on average, while Venus is only 67.25 million. Since the intensity of the Sun's radiation decreases with distance from it as 1 over r-squared, Venus receives (93/67.25) squared, or 1.91 times the power per unit area that Earth receives, on average.

[Note: The derivation of the radiating temperature above is for absolute temperature, in degrees Kelvin (K), so the 1.176 factor relates the Kelvin temperatures, not the Celsius temperatures.]

So there is no greenhouse effect. You have just proved that climate science is utterly wrong to think otherwise. This is the scandal that so many "experts" in climate science, and all the scientific authorities, will not face. Listen to the physicists that tell you there is no greenhouse effect; they know without having to go to the Venus data -- and I am one of them. The continuing incompetence on this vital point among so many scientists, for more than a century, is amazing, and tragic.

The Venus atmosphere is 96.5% carbon dioxide, and supposedly superheated due to a runaway greenhouse effect, yet that portion of it within the pressure bounds of the Earth atmosphere is remarkably like the Earth in temperature. This is student-level analysis, and could not have been neglected by climate scientists, if they were not rendered incompetent by their dogmatic belief in the greenhouse hypothesis. (Again, the overwhelming extent of fundamental incompetence exhibited by scientists today is the real underlying story.) This result also flies in the face of those who would say the clouds of Venus reflect much of the incident solar energy, and that therefore it cannot get 1.91 times the power per unit area received by the Earth -- the direct evidence presented here is that its atmosphere does, in fact, get that amount of power, remarkably closely. This in fact indicates that the Venusian atmosphere is heated mainly by incident infrared radiation from the Sun, which is not reflected but absorbed by Venus's clouds, rather than by warming first of the planetary surface. (It also indicates that the Earth atmosphere is substantially warmed the same way, during daylight hours, by direct solar infrared irradiation, and that the temperature profile, or lapse rate, for any planetary atmosphere is relatively oblivious to how the atmosphere is heated, whether from above or below.) This denies any possibility of a "greenhouse effect" on Venus (or on Earth), much less a "runaway" one. This has already been pointed out recently by physicists Gerlich and Tscheuschner, who have written succinctly, "...since the venusian atmosphere is opaque to visible light, the central assumption of the greenhouse hypotheses [sic] is not obeyed." Yet they are ridiculed by climate scientists, who thus behave like spoiled children who refuse to be chastised by their parents.

Update March 14, 2012: This analysis is so easy, the result so immediately amazing, and the interpretation just above so obvious to me, yet the opposition to accepting it so universal and so determined, that I was led to unconsciously accept, partially but nevertheless wrongly, the premise of incompetent critics, that my findings were invalid because I had not "corrected for albedo", or in other words had wrongly assumed the Earth and Venus atmospheres were blackbodies, absorbing all the radiation incident upon them. I inadvertently got caught up, over time, in claiming the Earth-plus-atmosphere system behaves like a blackbody (although I never claimed it absorbs all the radiation incident upon it, as a blackbody is defined to do, and as the incompetent dismissers of my analysis have determinedly, dogmatically insisted). Although this has thoroughly hindered the acceptance of my analysis, my initial approach to the problem was in fact sound (even if too simple-minded for most), and my above, initial interpretation is quite correct, and in fact unavoidable, although it is not a complete statement. The complete interpretation, which I have stressed (as a logical fact) ever since, both in comments below this article, and on other internet sites, is that the two atmospheres must DIRECTLY absorb the SAME FRACTION of the incident solar radiation. For, supposing that both atmospheres do so absorb, and are solely warmed by, the same fraction (f), and given that the ratio of the two planets' distances from the Sun--Venus/Earth--is (A), the governing formula becomes, for the Earth and Venus atmospheres in turn 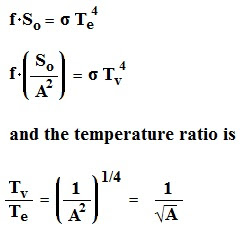 This result is independent of the fraction f absorbed, which is why naively approaching the problem as if f = 1 nevertheless gives, without the need to even consciously consider albedo beforehand, the amazingly clear result that the temperature ratio depends only--and amazingly, quite precisely--upon the ratio of the two planets' distances from the Sun. Any "expert", upon seeing this amazing result, should quickly have realized it means both atmospheres must absorb the same fraction of the incident solar radiation, and be warmed only by that fraction. So I apologize for not presenting the explicit equations above sooner, for it would have saved me stumbling into error later, and embarrassing my few defenders, in my "blackbody" defense of the original analysis--but I insist my critics have all been more incompetent than I in this matter, in refusing to even consider my correct interpretation, because of what they merely assumed was a fatal error. There was no physical error in my original analysis, because the temperature ratio I obtained was an empirical fact, and the absorbed power ratio I implied from that was a logical fact (simply stated, Venus's atmosphere DOES absorb 1.91 times the power that Earth's atmosphere does, as their temperature ratio shows--and that ratio is precisely that predicted simply from the ratio of their distances from the Sun). Since the two atmospheres DO, factually, absorb the same fraction of the solar radiation incident upon them, there was, in reality, no physical reason to extend the analysis by "correcting for albedo". But I seriously underestimated the level of determined ignorance--alias incompetence--of the "experts", and dropped part way down to their level for a time.

Another way to look at the Venus/Earth data is this:

The radiating temperature of Venus should be 1.176 times that of the Earth.

Without ANY greenhouse effect as promulgated by the IPCC, at any given pressure within the range of the Earth atmosphere, the temperature of the Venus atmosphere should be 1.176 times that of the corresponding Earth atmosphere. 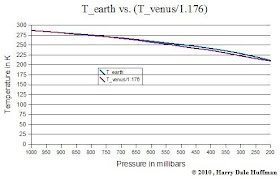 There is no sign whatever of a greenhouse effect on either planet. The fact that the temperature ratios are so close to that predicted solely by their relative distances from the Sun tells us that both atmospheres must be warmed, overall, essentially in the same way, by direct IR solar irradiation from above, not by surface emissions from below. Keeping it simple, the atmospheres must be like sponges, or empty bowls, with the same structure (hydrostatic lapse rate), filled with energy by the incident solar radiation to their capacity to hold that energy.

There is no greenhouse effect on Venus with 96.5% carbon dioxide, and none on the Earth with just a trace of carbon dioxide.
Harry Dale Huffman at 9:51 AM